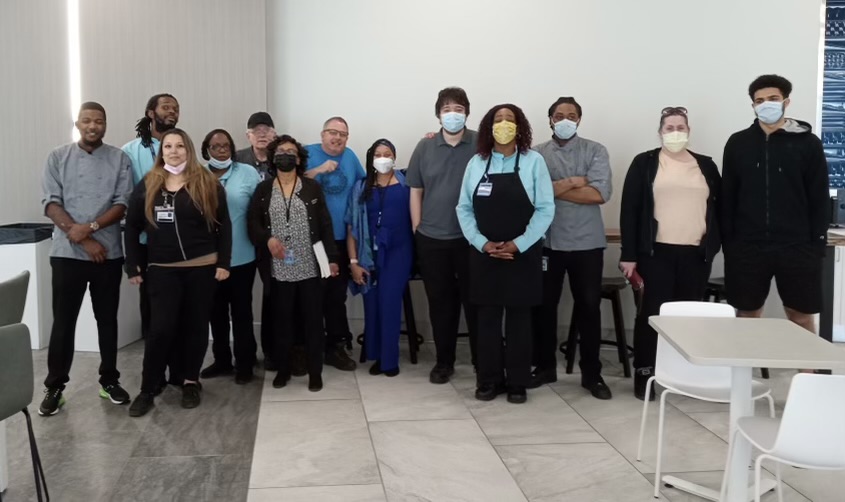 These new members work in the Food and Nutrition department at McLaren’s brand-new state of the art hospital in Lansing. Our Union already represents over 1,000 employees at the hospital including Nurses, Techs, Paraprofessionals and Skilled Trades. We used to represent the Dietary department as well until McLaren subcontracted the operation to Morrison in 2017.

The new hospital opened in March 2022. Local 459 vowed that the cafeteria workers would be Union! They were making as little as $11.00 per hour just a few, short months ago. Those same employees have already received a raise of three-dollars and fifty-cents ($3.50) per hour and will move to a minimum $15.50 per hour by the end of the contract.

In July, 2021 a former McLaren Dietary employee and active Local 459 member, Monica Artis, was hired by the Union to be a Service Representative and Organizer. She quickly got to work on Unionizing the food service workers. In early April 2022 the Morrison employees voted to become represented by Local 459. In June, we started bargaining for a first contract. In September we completed the agreement and the members approved it.

The agreement includes language on grievance and arbitration, recognition, representation, just cause, seniority and many other areas that make a Union contract one that does not allow its members to be treated unfairly or with disparity; and provides for agreed upon mechanisms for dispute resolution.

The CBA also includes many other economic benefits as well as new increased minimum starting rates, wage increases of at least $.50 each year and a $500 signing bonus upon ratification.

The Local 459 Bargaining Team was Chandra “Chan” Paley and Zoe Simpson. They were assisted by Organizer Monica Artis and Senior Service Representative Lance A. Rhines.