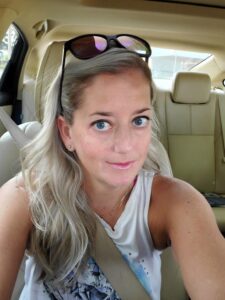 Karah Sorensen is a Steward for the Technical Bargaining Unit of OPEIU Local 459, at McLaren Greater Lansing. Sorensen started her career in Radiology in 2011 as a per diem X-ray Technician, before joining the Technical Bargaining Unit (full-time) in 2015. She transferred to the Cardiac Cath Lab in 2015 and became a Steward the following year (2016).

She held a position on the Executive Board of Local 459 but was unable to complete her term due to an excessive workload placed upon her by the employer. Sorensen is a valuable resource within the Cardiac Cath Lab, as she became the trainer, unofficial educator, “Jack of all Trades“ problem-solver during the evolution (and unfortunately, high turn-over period) of her department’s growth in the last five years.

She is part of the TAVR (Transcatheter Aortic Valve Replacement)/structural heart team, the EP (Evoked Potential) team, and a super-user for the specialized X-ray equipment and IR (Interventional Radiology) procedures.

Sorensen graduated from LCC with an Associate of Radiologic Technology in 2011, and a Bachelor of Applied Science with a minor in Healthcare Management from Siena Heights University in 2012.

She learned quickly that the Union plays a significant role to “help workers feel supported and gives them a voice in their work conditions, contracts, compensation, and expectations among many other things. If an employee is not following the bargaining unit agreement and rules, HR is there to hold them accountable. If the employer/HR is not following the guidelines or contract agreement rules, an employee has the Union support to hold the employer accountable.”

In her spare time, Sorensen likes watching the Detroit Red Wings. She also likes to play poker in tournaments across the country (pre Covid-19) and run outside in the warmer months. She especially enjoys the Capital City River Run half marathon relay by participating “just for fun and to offset my diet coke habit.”